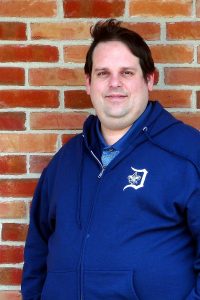 Jason has been our Technical Director since July of 2014.  Jason oversees all technical aspects of our services, facility and website.

In his professional life, Jason is a Quality Assurance Manager in the industrial coating industry.  He has been in that industry since 1997, starting out as general laborer on the production floor, and worked his way up to Quality Manager within the first 2.5 years of employment.  He has held that roll as Quality Manager since 1999, and has also had rolls on and off, as production Supervisor and Environmental Manager.  While working full time, Jason also earned a degree in Electrical Engineering Technology from Easter Michigan University.

He has been involved with music since he was 11 years old.  Starting out playing the Clarinet / Bass Clarinet, he also learned how to play the Saxophone so that he could play in the Jazz Bands.  While younger, Jason was in all music programs that were available; concert, jazz, marching bands and pit orchestra with musicals. He continued to play while in college, and then in local community groups

He brings that music talent and passion weekly to Cross of Christ to mix, at the helm of our soundboard.

Jason has one son Calvin.  His son Calvin is learning to play the drums, and is a Boy Scout.  Jason also volunteers in Scouting at different levels, including with his son’s troop and on the District Level.   In his free time, he enjoys listening to Big Band Style Jazz music, Detroit Tigers Baseball and spending time with his son Calvin.